Dailes have come to stay in WoW.

It's the one thing they know how to do, is to get people farming reputation, for the sake of being exalted or  best buddy with somebody. It's true, in the past it was worse, dailes were all the same every day. Now, in MoP they got more creative, with (a few) different dailies day in day out, multiplied the number of factions, normalized, so there's never a weird thing like "Go find Greg. Oh, you can't wowhead it ? That's right, you can't. He's somewhere in Jade Forest, but no one know where he is, as it's totally random. If you find it, you get kudos ! If you don't, you get paid by the time you spent searching for him".

Anyway, the strategy is the same,a nd I've told it here several times. You cap, you go into dungeons, you farm gear, you farm reputation, for more gear/enchants/whatever, so you can get into heroics and raids and... /yawn. Oh, yes, there's PVP too. You cap, you go into good old AV or good new.. (what's the name of the bg anyway ? haven't bothered to go inside, but will do soon) and farm HP, and cap arenas to get.. some gear.. for ... what was the goal anyway ? Ah, have fun.

Yes, fun ! That's what it was all about. So that's why we're killing every day, X mobs of this type, gather Y herbs of that type, destroy Z machines of that other type, and so on, and so forth, in a totally boring, repetitive way. When do you know it's happening ? When your brain is switched off or thinking about the boobs you saw last night, while you're doing the damn dailies and delivering the quests, not even bothering to read the quest, or how much rep you got that day. It's a damn fun way to spend your free time. Yeah, I know... i can quit.

The nicest thing, is that although there are guilds, you do 90% of this entire tasks and spend 90% of the time... alone. At least, I do. well, not always, there are guild runs for heroics, of course.

A few things are better with MoP:

World bosses are back (FINALLY!). On a PVP server, it's fun. Well, depends, if you have it tagged at 10% and the other faction shows up with killer instincts.

Rares are back. And some are hard as hell to kill.

Tiller's farmville is fun. Kind of. If you like the genre.

I hope there's some curry recipe somewhere. Because I love curry and I'm starving.

On a structural relocation


After two years playing WoW in Vindication and three years on Silvermoon, the "locked" server with a multitude of players and over 100.000 items on auction every day, I decided to relocate to The Maelstrom, a PVP server where Haunted Heavens went to. Haunted Heavens, the guild absorving most of old Saviour Deviate Delight guild from Toede and Nilaihah, my old pals from Chromaggus. 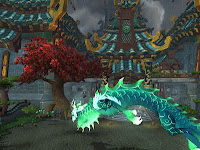 It's a challenge, because Haunted Heavens, like Arcadia/RGC was, is a 25-raiding guild aiming for N/N boss kills, not a casual one like Vindication. But this time I've got a PC that can handle 25-raids A.O.K.

For now, I'm still leveling the warlock, paladin and warrior, but soon I'll have to focus on one, and of course, my necromant blood starts boiling again.

I liked the Valley of the Four Winds questing, it was fun helping Chen Stormstout. I'm now moving up to the Summit, after doing some quests on the southern Hills, but jungles are not for me.


Tankwise, I've been warrior and paladin in instances, and it's going quite good. Let's see when the first heroics come.

I noticed a weird behaviour concerning quest gear offering. Depending on the talent spec you have activated, the quest reward will be different. So if for example you're tanking but you want a reward for dps, you have to respec and then complete the quest. Blizzard... why don't they simply offer the different possibilities for the class ??? That's very stupid.


In GW2, it goes slow, I'm now level 26, done with Kazzak Hills and moved on to the Gendarran Fields. As I'm playing together with a guardian, we're both doing the epic quests together, and it's to nice that the epic class/profession stories get merged by level 20 or so. The sad part is that the other guardian we play with is a n "elf" (ok .. sylvari) , so he gets two different starting zones at least up to level 25.
Posted by Pedro Lucas at 8:45 AM No comments:

On GW2 and MoP, first impressions

Well well well, autumn is here, and with it, Guild Wars 2 and Mists of Pandaria.

Let's start with GW2. After a few weeks with me creating chars, doing some initial quests and halting, I ultimately decided to level an Elementalist, ie, a mixture between a WoW mage, priest, and warlock (dot dot dot). 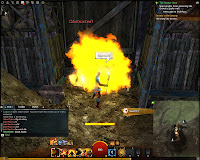 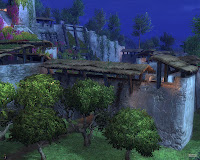 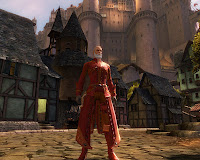 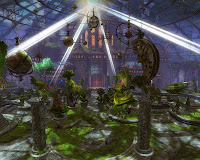 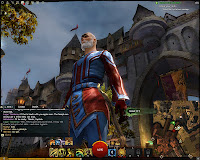 What can I say ? The graphics engine is stunning, it resembles (a lot) Warhammer Online, and we can see that things have come a long way since 2005, when WoW launched.

The interface is smart, simpler than WoW, but skills had a lot of thought in their making, so skills are "smart". And in my case, there's 80 of them. EIGHTY different skills, spread in four attunements and a few different weapon types.

There's a class/epic quest line, similar to LOTRO. But then, there are no "quests". There are tasks to do, you may do them, or skip them. You can simply level up by exploring, by collecting stuff, by going for PVP, or by going around and finding new, different events showing up suddenly, with hard bosses, and people rushing  up to help. It gives you the feeling of a full world, the way WoW was before they invented "hubs" and "flying mounts". Furthermore, you don't heve to be in a party to do anything. You can be in a party with friends, but go for any event or task and be rewarded.

The simple fact that you get experience for reviving a player gives a sense of community that I had lost.

As to battling, I've mostly done PVE stuff, but I can say it's hard, harder than WoW (PVE WoW difficulty is a joke until cap level nowadays), but if you play your cards well, you can still feel "invencible".

I am liking GW2 very much. RIFT was a newer WoW. GW2 is not a newer RIFT, it's a bit different from everything I've seen in MMORPG, although you feel the MMO effect.


Graphics are... WoW. I got used to the chinese way, and I'm actually enjoying the sense of peace and contemplation pandas bring to questing and to battle (or the lack of it). The views from above or from flying are nice, it gives you a feeling not only of the northern chinese mountains, near the Great Wall, but also of Machu Picchu ( may be the set for the next expansion :PPP). There are also a few laughing moments, specially with a dwarf named Sully and his raccoons !

But the rest is all the same, dungeons are easy, killing makes you feel overpowered, one can kill 4-5-6 mobs at once, as a demo Warlock, as a retribution Pala, an arms Warrior, at least. As an elemental Shaman, it is a bit harder.
And what is also the same are... players. Players are rushing through the content, not reading quests at all, but all aiming to 90 in a week and an epic gear set... what for ? I don't know, to sit down and wait for the next big patch, probably. Dear Lord, there are level 90 monks already, 1 week after release, leveling from level 1.

All things considered, if I had to exclusively choose between spending my time in GW2 or MoP, I'd go for GW2 without hesitation.

Until then, I most probably will only go for LFR to know all the raids, do some reputation, Cata runs (still miss going inside Throne of the Four Winds) and stop by Christmas for a few months. For now, I'm enjoying leveling at my own pace.