Glory of the Late Draenor Hero

Two months later, a few single player games like The Witcher, Layers of Fear or the Vanishing of Ethan Carter and a new episode of Guild Wars2, I resubbed WoW to play the legion pre-patch events.
Silly events, just like those in vanilla for TBC or others I played, but at least, not bugged, and easy/fast to complete.

And then I remembered three things I missed from Dreanor.
1 - The Pandaren Hide from Ashran.
2 - The Garrison bosses and a few Platinum modes
3 - The Glory of Dreanor Hero, 6 hard achievements in UBRS and Skyreach !!!

Glory is done thanks to a great group and a vice-leader that leaded way better than I did :) . Damn kids are so more mentally agile these days...or may be it's me getting old and messed up. 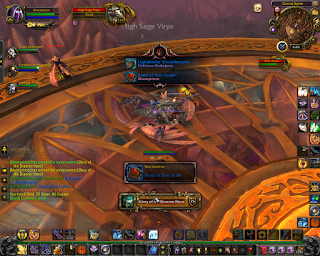 The Platinum modes are done, but cba farming possible hipothetical garrison bosses. It's a thing for later on, may be I'll get lucky with LF custom.


The Pandaren...that's a pain, thanks to the IDIOTIC decison of creating mandatory raids for Ashran. Fortunately there's a "LeaveParty" script command that sometimes work and leaves you raidless but still in Ashran. Unfortunately it's only sometimes like that. The proble with the mandatory raids is that you farm pandas, you kill pandas, you LOOT pandas, and then...some idiot miles away needs on my loot and gets it because of my poor luck. Happened twice already.
Then there's the problem of having one panda in the whole Ashran, if we're lucky, one panda in 40 enemies.


But wait , there's mercenary mode, and you can get a panda hide in mercenary mode.
Unfortunately...MERCENARY MODE isn't working, only for some realms, it seems. Once in a while I see a mercenary, but on my servers I can never ever join a mercenary raid.

I dont want to spend 50 bucks to buy Legion for my 2nd account only to get a free horde 100 panda only to...kill it and get a hide.


Oh well... two weeks to Legion, a bunch of Demon Hunters all around. Been killing them like flies LOL.


PS: Got a MSI GTX 1060 and couldn't be happier. Yes it was more expensive than the RX480. But the AMD card was way worse than I expected, performancewise, heatwise, wattwise.
Posted by Pedro Lucas at 11:18 PM No comments: