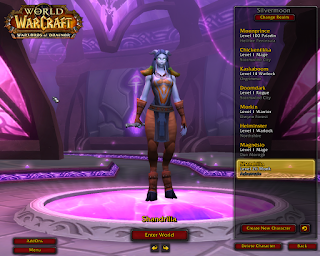 After a bumpy start, with:

I'm now lvl 26, going past 25% of the challenge, ready to punch into Stonetalon Mountains.

The thing I'm most afraid atm is DCs, panicking, or pulling a lvl ?? or too high lvl by mistake. And rares. And "evaded". And simply being reckless.

I've been streaming on twitch, and recording episodes, and will probably publish them on Youtube, to help those that wanna see Kalimdor from an Ironman's (ok, girl) perspective.

Posted by Pedro Lucas at 5:48 PM No comments:

Just reactivated my WoW account. I'll be attempting the Ironman challenge and finish the Glory of Dreanor Hero dungeons, as I only miss six achievements.

Ironman went fine...for a while. I leveled my druid in Darkshore until level 19, when I found a rare, which had company, and I decided to give it a try. Of course, it failed horribly wrong, and...I died.

So...after some mourning of Panoramia, I decided it was time to create a new class and race, as I miss several races in my characters. Draenei was one of them, never liked the male guy.

But the lady dreanei is beautiful, specially after the graphic revamp, so I went for it.

Then I looked at the Wowchallenge.com honor list, and noticed that Shamans are even more rare than the rare that killed my first iron girl.

And... I died as a Shaman. Long story short, never engaged a boss that marks the end of a zone before reading about it... and not when the women of the house are talking like chicken around you.

I lost concentration...a damn undead dragon called Razormaw feared me, and then it was over !

THIS SHIT IS HARD !

LOL
Posted by Pedro Lucas at 6:22 PM No comments: