On my 2nd legendary

Three years ago, maybe more, the Eye of Sulfuras dropped on my warlock inside Molten Core.
But... warlocks can't use a 2H mace.
However, paladins can... so I bought all the required mats, and waited for it to drop on Moonprince, my Warlord of the Free.
Tonight, it did.
A nice guildie, Brodock from Silvermon, crafted me the Sulfuron Hammer in the black anvil inside Blackrock Depts and then, it was just a matter or combining it with the Eye of Sulfuras.
And here I am, a proud owner of The Hand of Ragnaros ! 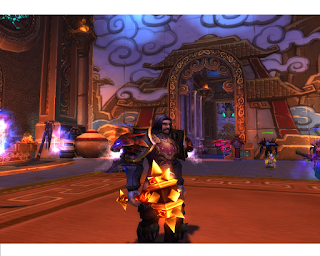 There's nothing like an epic fight. The Warlock class quest IS an epic fight, you get to use most of your warlock abilities, in a raid-like solo fight, that will kill you over and over, unless you know what to do when and how to do it. In 10 years of WoW, the only thing that slightly resembled this fight was, for me, the Sindragosa Heroic raid.

I did it, with a iLvl 506, with BoK and food. Without them, I got Kanrethad to 10% and then decided that I could do it but it would cost another pack of hours.. and I didn't want to wait!
So I got the 4% stat buff (that btw, was eaten by the Felhunters, as well as my spell+stamina personal buff, a few mins later !!!) and that allowed me to kill Kanrethad 16 sec before the 7 minute Curse of Doom expired, and before the third wave of Fel Imps was summoned.

Netcownt is now a master of Green Fire.

Posted by Pedro Lucas at 7:29 PM No comments: