It's an achievement in itself, without a guild to or a bunch of rated pvpers to help me.

Yesterday I tried my first rated battleground with an experienced half-group. It's an amazing experience, but at the same time, horrific. I thougt I knew what to do, more or less. Wrong. Although I spammed fearing healers, CC'ing, interrupting, listening to orders, it was VERY hard. Ok, the team I joined had a rating of 1500, so the opponents were not exactly noob. But 10v10 against full 403/410 cataclysmic gladiators ? It's a nightmare. I only wish I had frapsed it, together with the offenses that the wanna-be-leaders voiced on vent, to the so-called-noobs like me. It ended with me yelling, something I never did in 7 years of WoW, and pressing Alt-F4, while venting rage. Luckily for him he wasn't around, otherwise that kid would have been shot for real.

Indeed I think it's time for a little MMO break. It stopped being a game, and it became War.

Easter bunnies are much more fun.
Posted by Pedro Lucas at 10:51 PM No comments: 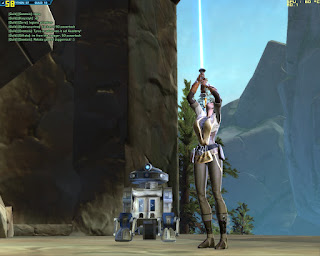 On SWTOR, I did

level an imperial bounty hunter to 50 √
level a republic jedi knight to 10 √
level biochem and bioanalysis to 400 √
create my own matrix based relic √
find most datacrons √
do all missions at least once, except a few extended √
unlock all 50 dailies √
reach rank 30 in pvp √
become unbeatable in a bg √
participate in all space combats √?

But my main server is empty, there are not enough players to set the MMO feeling to the game, and farming gear does not appeal me as a way to spend my endgaming time.

Bioware does not want to allow server merge or transfer, for several reasons, one being trigging a "failure alarm" in the media.
Other reasons: it will cause the empty servers to become even emptier, full servers to be overflowing, anf ofc people won't spend time(=$$$) making alts on other servers.

Where does it all go wrong ?

First, With the legacy system. The legacy system is designed to be intra-planet, so that players create an entire family. But by the current state of affairs, players will be having multiple legacies, which makes no sense.

Second, it annoys me to be alone in a world, or be part of a community of the same 20 players over and over.

So.. I feel like waiting for server transfer activation to continue playing. Easter break is coming, so it seems like a good time for a break. After that I will think on wether to continue my republic leveling (leveling all over again, YUCK !) and what path to choose for my knight.

To the Great River we march.
Posted by Pedro Lucas at 10:09 AM No comments: 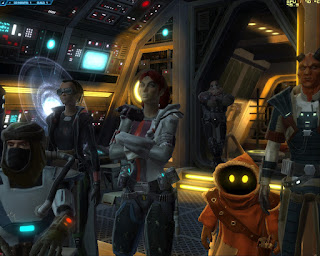 In the last days, I've been mostly playing SWTOR, I've been leveling my Bounty Hunter, and I'm proud to say, I've reached the cap level.

WoWwise, I've restarted playing my old hunter, moving him to the Portuguese Aggra server. He's now Bimbo, a very nice dwarf captain. I'm gearing him up to try and go Dragon Soul. But it's been hard, gearing up from lvl 333 is very hard, 346 heroics take long because of noobs and until I get 353 to get to the 358 instances... justice+valor takes a loooong time to farm. Oh well.

AION, started playing a bit with a RL friend but going slow, 1-2 lvls per week.
Posted by Pedro Lucas at 8:24 AM 3 comments:

I got a few achievements I longed to get. 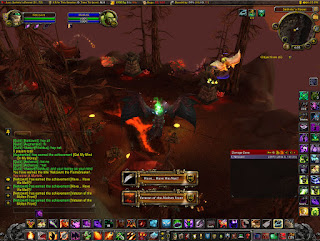 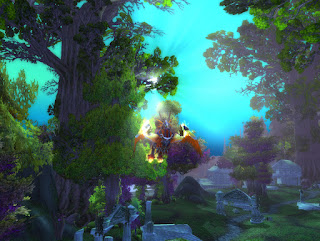 Veteran of the Molten front was one, after a nice ally parked his horde with Mankrik add in Hyjal for us poor allies to /wave him. 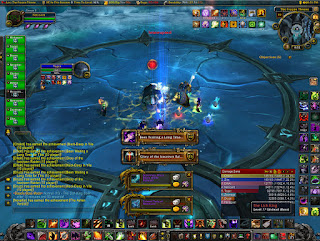 Another was the Glory of the Icecrown Raider, I finally got my skeletal mount. We had to do "Been Waiting A long time for this" in normal, as in heroic, as usual, half the raid was blasted away after the first ground debuff (forgot the name).

Talking about skeletons, I also completed all the Archaeology profession achievements, and in the process I got myself a skeletal reaper and of course, the Professor title.

I missed obtaining the two archaeology trophies I wanted to get, but they are so rare that.. well.. may be it's not worth farming. I'm talking about the marine AQ-40 silithid mount and the Vial-In-The-Sands twin rider drake mount.

Last but not least, I went with the guild alts to Dragon Soul 10, and killed Deathwing, achieving Destroyer's End. Made a few stupid mistakes. The most accpetable was failing to run away from Blackhorn, it's a bit hard to step away in phase 2 when he damages the ground floor.

This weekend, I'll get Insane in the Membrane, after the Darkmoon Faire ends and I get a few decks. Oh, and the 125-pets one is coming today. Damn, they came up with a 150 pet achievement :)

Ah, and most fun, I entered a relaxation guild called Que Inc with Moonprince, and in two days, I was able to tank and learn how to play retradin in cataclysm (quite differen from WOTLK, when it rocked for being so easy), and was able to go for Dragon Soul LFR. DPS is still miserable, as I have half gear tank, half gear dps. Ah, and I had to get Power Auras to be able to keep up with retradin buffs.


In the SWTOR front, lvl 44. Indoor stuff is tremendously repetitive, they made the same mistake as LOTRO. The class quest campaign is very good. Battlegrounds are pretty nice too, I'm getting good in Huttball.

AION went F2P, tried it for a few nights with RL friend. My old sorcerer Varinha is still there, parked at lvl 17.

LOTRO.. waiting for update 6. Went for a 3-man instance once , but my companions are slacking in the showing up part, so I'll have to wait.
Posted by Pedro Lucas at 9:32 AM No comments: