Accepted and completed...hurrah. This was not quite as hard as the green fire quest, but I completed the Destruction Warlock Legion challenge (Tugar and Jormog) with 897i (see below, I wanted to make sure I did it below 900i) and got the appropriate achievement for it. Quest is "FelTotem's Fall". 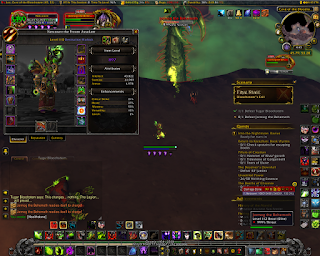 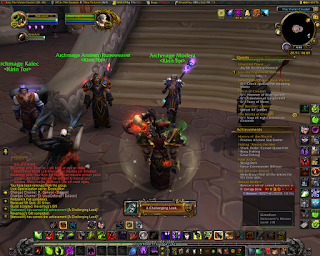 As an advice for fellow locks, I'll leave my strategy. I used a pre-pot and ofc a flask and food. I had 4 interrupts available: This Mortal Coil (joke)(45sec), Spell Lock(24sec), Grimoire of Service-Felhunter(1.5min) and ofc Fear. I used fear mostly for the Earthquake cast but also sometimes for Felburst cast. Focus always on Jormog because of the Sonic Scream cast.
Don't forget to refocus when he comes out of hiding (/target Jormog /focus target /targetlasttarget /cast [target=Focus] Havoc)
Unending resolve comes handy when you have no interrupts available and it's too late to cast Fear so you know you're gonna get a Felburst right in your face.
Talents: Backdraft, Rev. Entropy, Mortail Coil, Soul Harvest, Demon Skin, Grimoire of Service, Soul Conduit.

So next in line is Demonology, Sigryn and its "The God-Queen's Fury" quest. Seems hard because it has 3 mobs to deal with and a bunch of valkyries aiming at you.
Posted by Pedro Lucas at 9:58 AM No comments:

Yadayada I quit and all that. Well...Blizz gave me a free 7-days and I figured, why not try and get the class mounts, now that 7.2.5 is out ?

- There's Black Temple revisitation week, an idiotic implementation of Timewalking, where your character can enter it once, then you get saved, and then you're no longer invited for other groups because... you're saved. That's deprecated code being effectively used as a "new raid feature" for 7.2.5. Blizzard has become a JOKE.

- There's Chromie scenario. I've saved 5/8 but I guess it needs a lot of reputation to effectively be able to finish it. Furthermore, it's damn confusing, both in gaming and position/movement terms. All in all, another messy thing, chaotic even. Thank god there are offline guides, but it shouldn't be so hard. Fuck, even the Suramar one better, the wandering army scenario or whatever it was called.

- There's the Kil'jaeden ramp up in LFR. Probably won't make it to the end, but I can always spend a few hundred thousand gold and get carried.

- Ah, and ofc there's the triple challenge quests (yes, dual for DH) at the Broken Shore. At least for my lock, 895, I should be able to do that. Yes, lets do that!

Last but not least, I've followed her for a few years, and she's graduating, so congratulations Lana, my favorite gamer (and an artist !): https://www.twitch.tv/shadowila
Posted by Pedro Lucas at 10:04 AM No comments: