Not a big fuss about it, I've been testing Ustream and Twitch.tv for audio and professional purposes.
But why not use it for gaming ? Well, let's give it a go.
When not gaming, I'll display a nice view from my window...better than my ugly face !
Posted by Pedro Lucas at 9:06 AM 3 comments:

Helms Deep and Deep Inside ..: GW2

After my holidays, I decided to come back to MMO gaming, slowly and at my own pace.

With LOTRO, I decided to push it a bit to finish the Helm's Deep expansion, so I could play the battle in itself. It was kind of fun, although it took some time to do all the quests in all the Eastfold, Westfold, Edoras, etc. Now that I finished it, Helm's Deep was a good job well done by the Game Developers. However, a new mini-expansion was released, West Gondor, with a new cap level of 100. But guess what, I'm already lvl 100, even before I ever went to West Gondor. No worries, I'll play it some time later, probably during Christmas or so.

To more serious matters... Guild Wars 2 ! I've been having much fun with this Season 2, playing a bit more hardcore, though still solo.

I joined a lot of daily boss kills, courtesy of the following timer links:

Feel free to use these to jump around doing bosses, getting an enormous amount of loot. I even finished the Tequatl meta achievement, I've now got the Sunbringer title !
I'm approaching the 5000 Respectul Achievement points, and my first 400 free GEMS ! Wohoo, that will go into..bag slot, of course.
Meanwhile, I've decided to go for some collecting (Staffs, for starters), and craft some amazing stuff. Just in time, because Collector achievements are up today, with the September 9th patch.
I leveled up Artificer to 450+, Huntsman to 400, and I already have Jeweller, Chef and Tailoring at 400, which will help me with crafting and $$$
My Legendary hunt is starting to get a bit better, since I can now make $$$...about 5-10g/day, so in a few months ... LOL ... I'll be able to buy myself a Precursor Weapon, if I don't get one first.
Ah, and I got two exotic named-weapon drops, a good value, which will do great for my alts, in a few.. years :)
One of them is a scythe that a lot of Necros cry for...time to level up Netcownt :)
Last but not least, I'm crafting Mawdrey, the exotic/ascended backpiece from the Season 2 Living story.
Takes a bit of trouble, a bit of gold and some persistence, but I'll get it ! 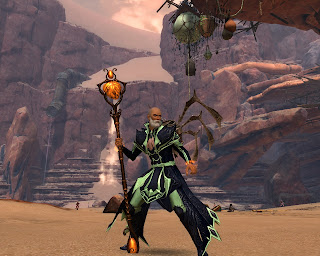 Posted by Pedro Lucas at 8:10 PM No comments: