To true legendaries and vanilla WoW

Three things happened the last days (well 4, I got my ear dizziness up and rocking, damn thing's worsening).

The first one, Shaniron, my 65 iroman died, after a power down event at home, because someone decided turn on a water heating cup when washing machines were on and ofc when I was killing a mob in Terokkar. Damn damn damn, I'm up to 63 with my fresh new Shaniron but man, was I angry.

The second one, a happier happening, I finally crafted my Guild Wars 2 legendary, [The Bifrost] ! Took me, I'd say, two years or so, but greatly gratifying, because it allowed me to see the entire content of the seasons, bosses, fights, zones, etc. Thank God for a great GW2 Community and Open Community , where people go together to do insanely hard things you couldn't manage on your own or in a small group. 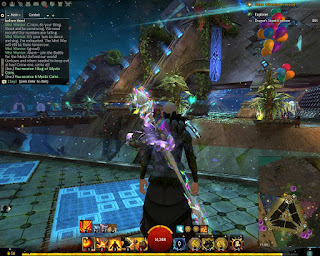 The third one... it seems there was a Vanilla WoW private server that was incredibly populated, just like the old days of 2005-2007 I loved and it was closed because of a Blizzard lawsuit, cease and desist typical, like they do with every threat when things start to go "too" popular. It happened, e.g. with Glider, the botting software.
Nostarius, the server, had about 1 million accounts, with 150k people logging daily. On a single, lagless, ultra-pop'ed vanilla 1.X server. Amazing achievement, ran by 30 volunteers, not profit-based.
Of course, it's a fairy tale, because Blizzard has a thing called business, and so, it was only just a matter of time before this would happen.
Still, it shows how WRONG Blizzard has gone with their path for WoW. Garrisons were an absolute joke, this xpac (so bad I did forget the name.. no legion, not mop, not cata..well this one, the current 6.2.x, omg I did forget about its name!!) was horrible.
It is horrible because the sense of community has gone away, helped by the dwindling subscribers. This is no longer a game for groups of players. It's a casual game for loners to sometimes join and do some basic things, not caring about each other, to just get things done and begone with it.
And that's the thing Blizzard didn't understand, why 1 million of (probably ex-) their subscribers went rogue, for a vanilla server (notice, not a private xpac server!!!) with NO LFG, where legendaries (that's the GW2 reference) are hard to obtain and NOT everyone has them, where mobs hit so hard you have to use all your abilities to put a pack down, but where people feel they are actually having FUN with each other.


That's also the reason why I'm doing the ironman challenge. I need to feel I'm having FUN, doing something hard. Like e.g. a 5-UBRS in 2005.

And that's the thing I've been getting from GW2, while getting money and mats to craft my precursor and then my legendary, over two years. FUN.
Posted by Pedro Lucas at 1:17 PM No comments: