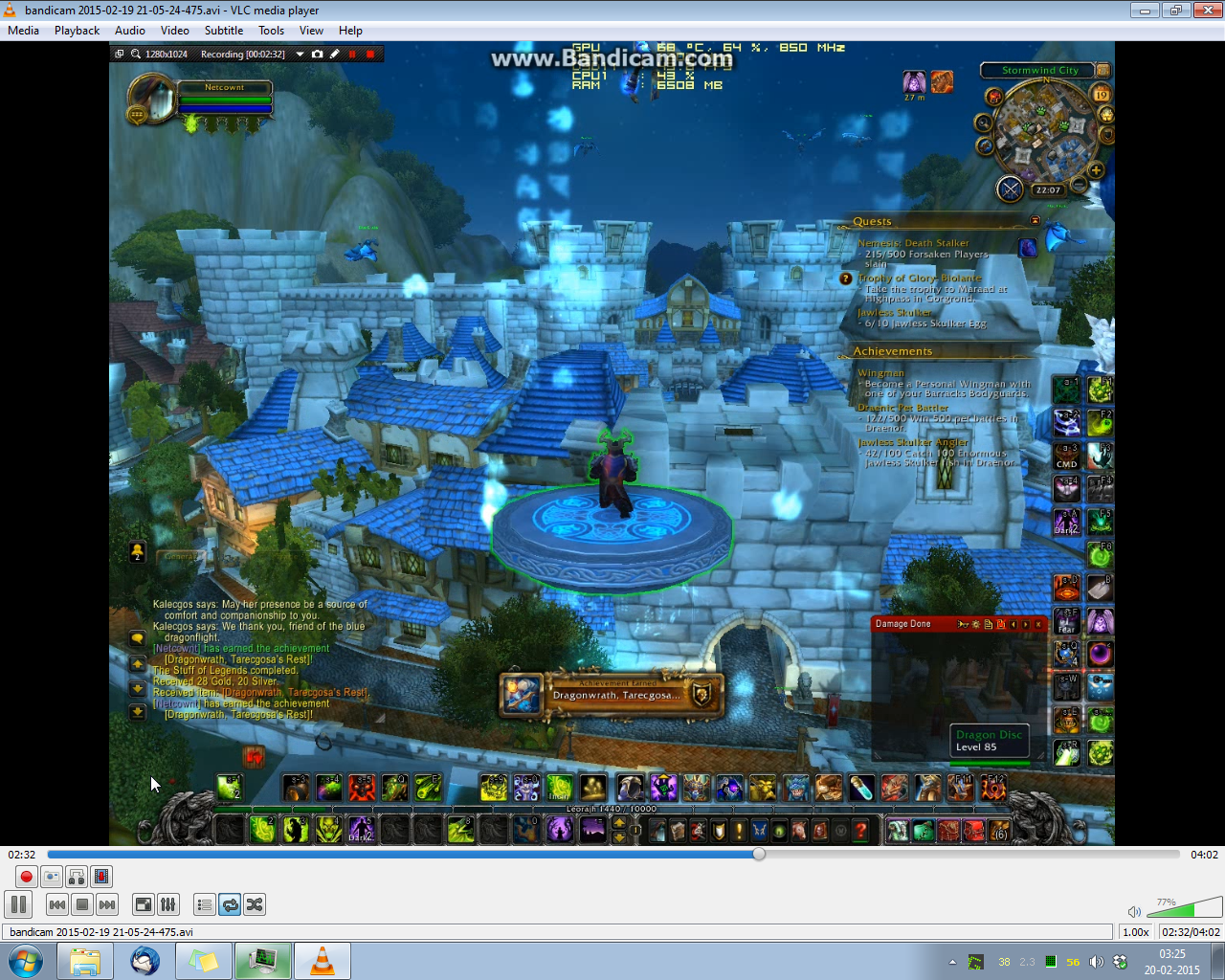 It took a few months worth of trouble, but Tarecqgosa, voluntarily trapped inside the Legendary Staff, is mine. Now onto Val'anyr, which has been damn unlucky to drop on my Paladin.
As to Frostmourne, I'm waiting for some help of Quie for the Blood Infusion with the BLood Queen in ICC. Hopefuly we'll do it soon.
May be after we kill Kargath ! 2nd attempt, a lot more healing but still he downed us at 41%. 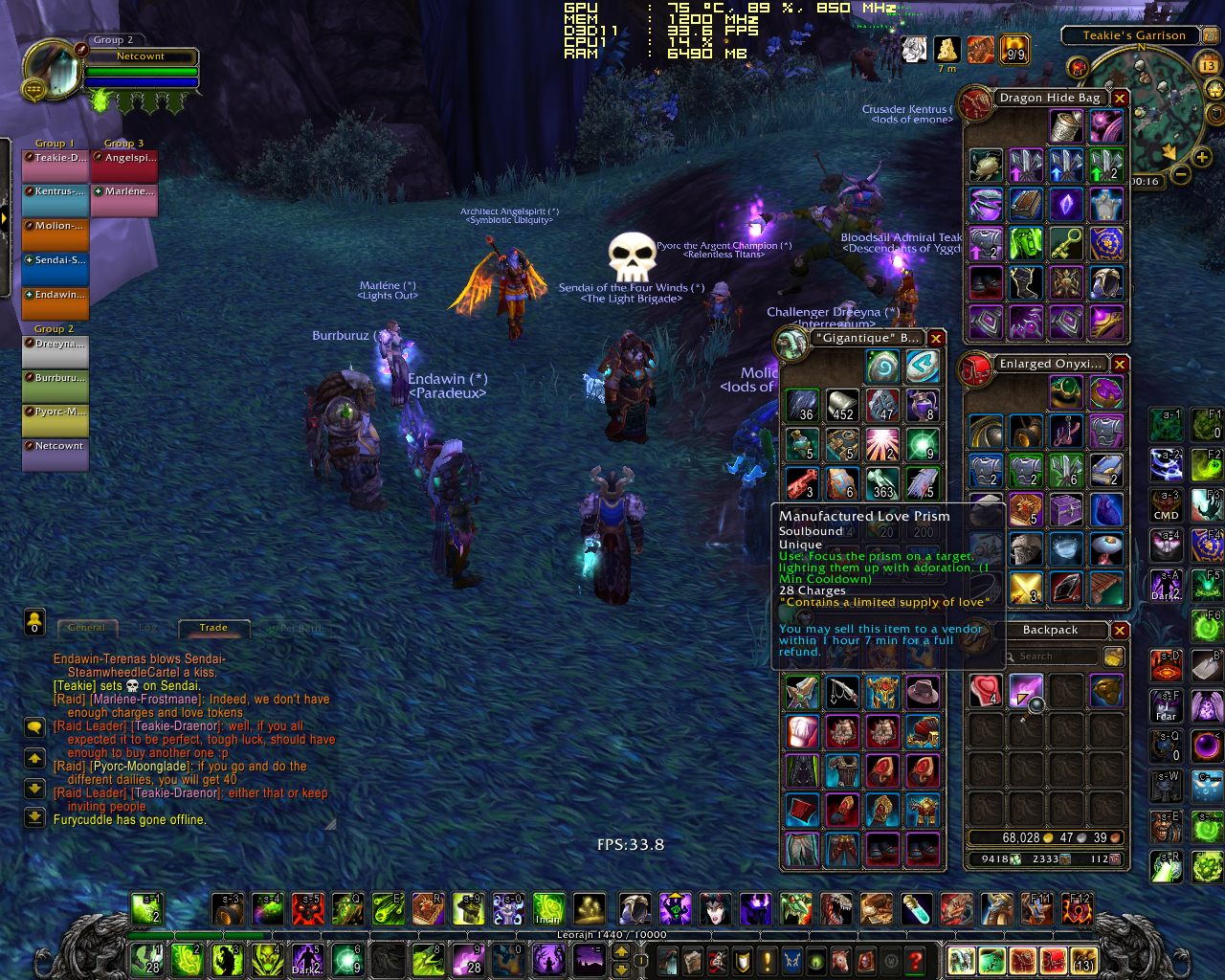 It was one of the most enlightening times of my 10yo WoW career.

For this, you need to have 50 Love Rays active on you simultaneously. And boy what a task that is.
I got it with the first PUG group I found, but later I found that the leader had been trying to do it for 20 hours, and I can surely believe that, because it's DAMN HARD to do it, in some circumstances.

It's an achievement that Blizzard designed for a group with persistence, that knows what to do, and has an infinite level of patience, understanding and solidarity.

More, it's not exactly ONE achievement. It's Nx1 achievement, 1 every turn, for each member, that have to take turns to get it.

You must stand on a circle for convenience, use a ray that has a 60-sec cd, 50 charges (or a 5 min cd if you have the achiev. + no charges), and time it with your mates in order to allow a buff to grow on the targetted idle member up to 50 times. This buff has only a 10 sec duration, so it must be refreshed quickly. As you've got less than 50 ppl in your party, people will have to time it for those that fired first to fire again, AFTER their cd has elapsed but BEFORE the buff vanishes. Otherwise...you'll have to start again, and you've just lost a lot of charges.

If you do it with around 10 ppl or less, you've got to refresh as late as possible (ie, when the buff is about to vanish) otherwise the first ones that used the prism will still be on CD when it's their time to use it again.

And the prisms take AGES to farm (unless you do it like me and go to Scarlet Monastery and use the pits to farm Zombies that spawn every 5 secs or so.. eheheheheheh), so you can't exactly go and buy another because you've used all your charges.

That's when you start thinking... with a PUG ? Right... after the first ones get it, they simply get the hell out of there and it ends in disgrace, because otherwise they have to be there for one hour or more AFTER they get the achievement.

Well, I found a set of 10-11 people that actually stayed there until the end (ok one went offline during the 11th attempt after we failed to do it), some of them with enough tokens for double charges.

Well, of these 11 people, only 7 had prisms with enough charges to do it in the end, so they had to time it PRECISELY to 1-sec-to-the-end-casting, and if you tried this achiev, you know what I'm talking about.
Moreover, some of them/us had to use the "toy" charge with 5min cd for those that didn't have charges on temporary prisms..and had to know WHEN to use it, in order to allow the cd of some members to expire and for them to be able to use the ray again.

So you had to know how to create yelling/casting macros to shout to your neighbor that he's next, use the prism on time, monitor the chat/yells/event and pray that all the other dudes around you didn't mess up, didn't D/C, didn't go AFK, didn't have lag or a spike....

Two hours it took me. But I got it, and all the other members :)

PS: For the last one, Marlene, we had only 6 ppl with charges, so it was no longer possible and we had to be a tiny bit nasty and invite some + ppl. The good news is that those ppl were able to learn it and saw it done for Marlene. But after doing it for Marlene, we told them the bad news...sorry folks.

TEAKIE-DRAENOR, the leader of this party, he never went mad, he always explained, he was always nice. What a CHAP ! First one to get the achiev, stayed with us until the last one got it, pushing us fwd !!!
KENTRUS, a crazy mage that kept doing ice rings and other spells in the middle of the event, dancing, running, making things be even harder
MOLION
SENDAI
DREEYNA - left before the end, so that makes him the black sheep. Well, gray...
ENDAWIN

THANK YOU, WARLORD TEAKIE from DRAENOR !
Posted by Pedro Lucas at 4:21 AM 3 comments:

My RIFT leveling pals went into pause mode, so I've been slowly moving up to 61, still inside the Reef. Below is one of the hardest solo (Epic) quests, having to kill a fast-respawn group of 5 guards and a boss.

On WoW, I decided to turn my paladin mode on and have some fun with Quies. And it has been so, we even went for Kargath and got him to 41%. Not bad, considering half of the raid has not been in one in years.

The bad part is gearing. I had a great great help from my guildies with 3 x640 crafted epics, and had a bit of luck with LFR, so I went from 605 to 632 in 2-3 days. Now it'll be slower, and my slacking garrison helpers/followers were not helping, but I'm fixin' it:

Heroics have been a breeze, I think I'll give a hint for us to try a Bronze of Silver challenge some night, to keep ppl focused and add some diversion.

Also, I plan to ask for help for a help on the Blood Queen towards the legendary item from ICC, since old Net is nearly getting his Firelands staff and Ulduar's fragments are slowly (OH SO SLOWLY) dropping for Moonprince.

Some more funny shots of the last days:

Posted by Pedro Lucas at 4:54 AM No comments:

I went for a Quie guild run on Silvermoon last night. Two dungeons, normal, with me as a recent 100 retro 596i paladin. And it was fun. Long time since I actually took the time to be on Vent...Mumble in this case.

Teamspeak, Ventrilo, Mumble...what was the name of the one I used for LOTRO ? (check) ah yes, Raidcall. A miriad of tools to do the same stuff :)

Anyway...nothing like a pal run to change my mood on WoD. We cleared Shadowmoon Burial Grounds (I think I never did that with old Net) and Grimrail Depot. All in a casual mood, some deaths and some experiments, but smooth overall, with Ganda healing and all :)
Ah while I was killing, I got a notice from my old GM pal saying he had been hacked, all friends removed and chars transferred. Arrgh. I knew something weird was goin' on. Hope he gets it all back.
That reminded me...I still don't have an authenticator.

Hmm, I'd say it's time to get one. Last time I checked, it had to be a physical one, which would be terrible for me, as I keep loosing the damn devices all over the house.
But, it seems we can now get a Mobile authenticator, so I'll be installing it after this post.

Guild Wars 2 frontline ? Nothing actually going on. Stormcallers, my guild, is going to be a little hardcore, I guess, as with Guild-vs-Guild in the expansion, they are getting ready, I guess, to do something like Wow Rating Battlegrounds as premade groups, in this case, all guildies. After I watched the guild meeting docs, I figured it's impossible for a casual to be part of it. They require knowledge of the class and game that I simply do not own. Oh well... 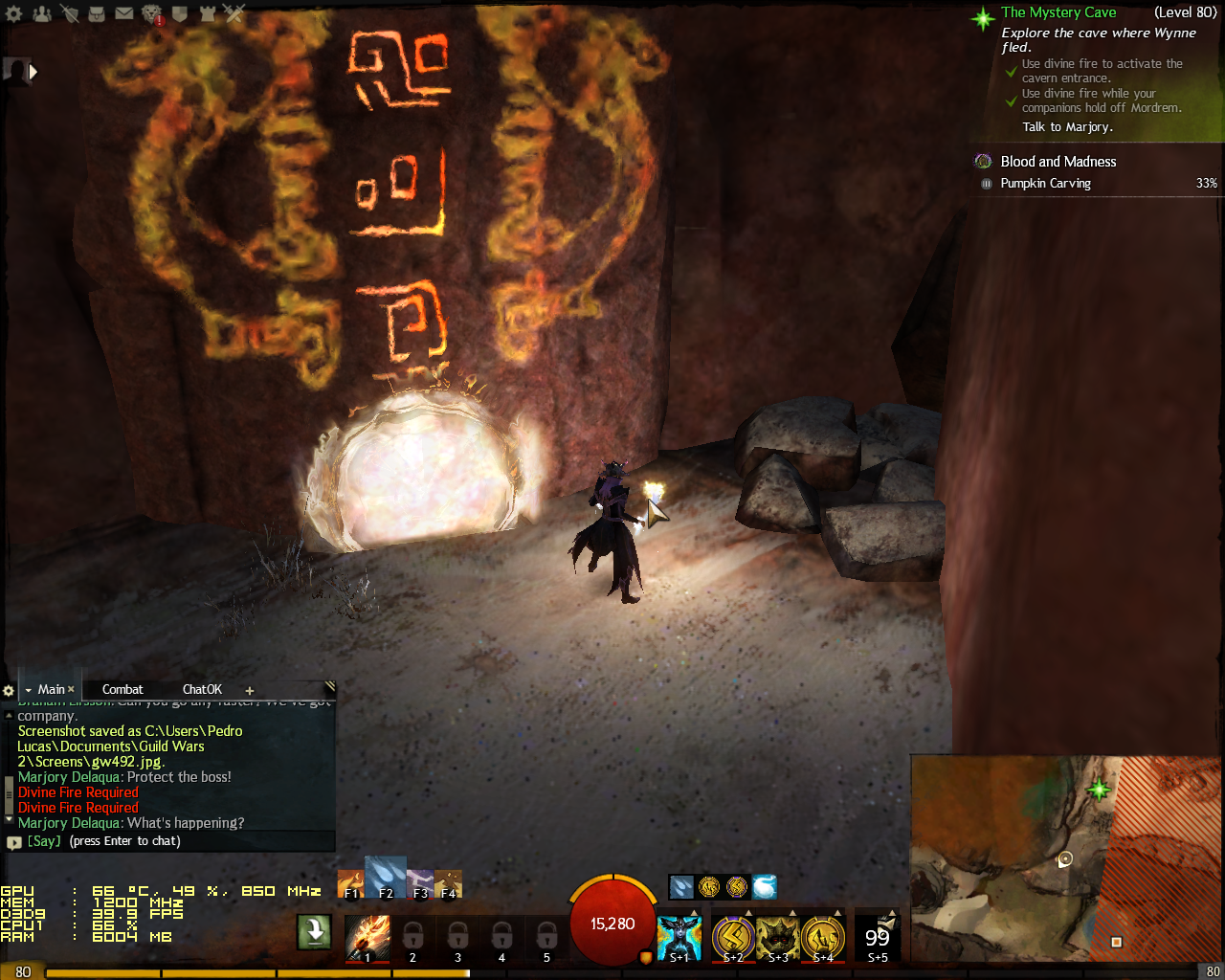 RIFT frontline ? Matadora is now 61, I've been doing some events in Gorboro Reef, the first Nightmare zone. The area is HUGE and beautiful. It beats WoW 90 "nautical" zone Vash'jir fair and square, and adds a nice touch, I NEVER saw on a MMO:

Water walls. A vertical plane of water that separate sub-areas. If you cross it, you can immediately start swiming and go in any direction. You cross it back and you fall to ground zero level. Well implemented. 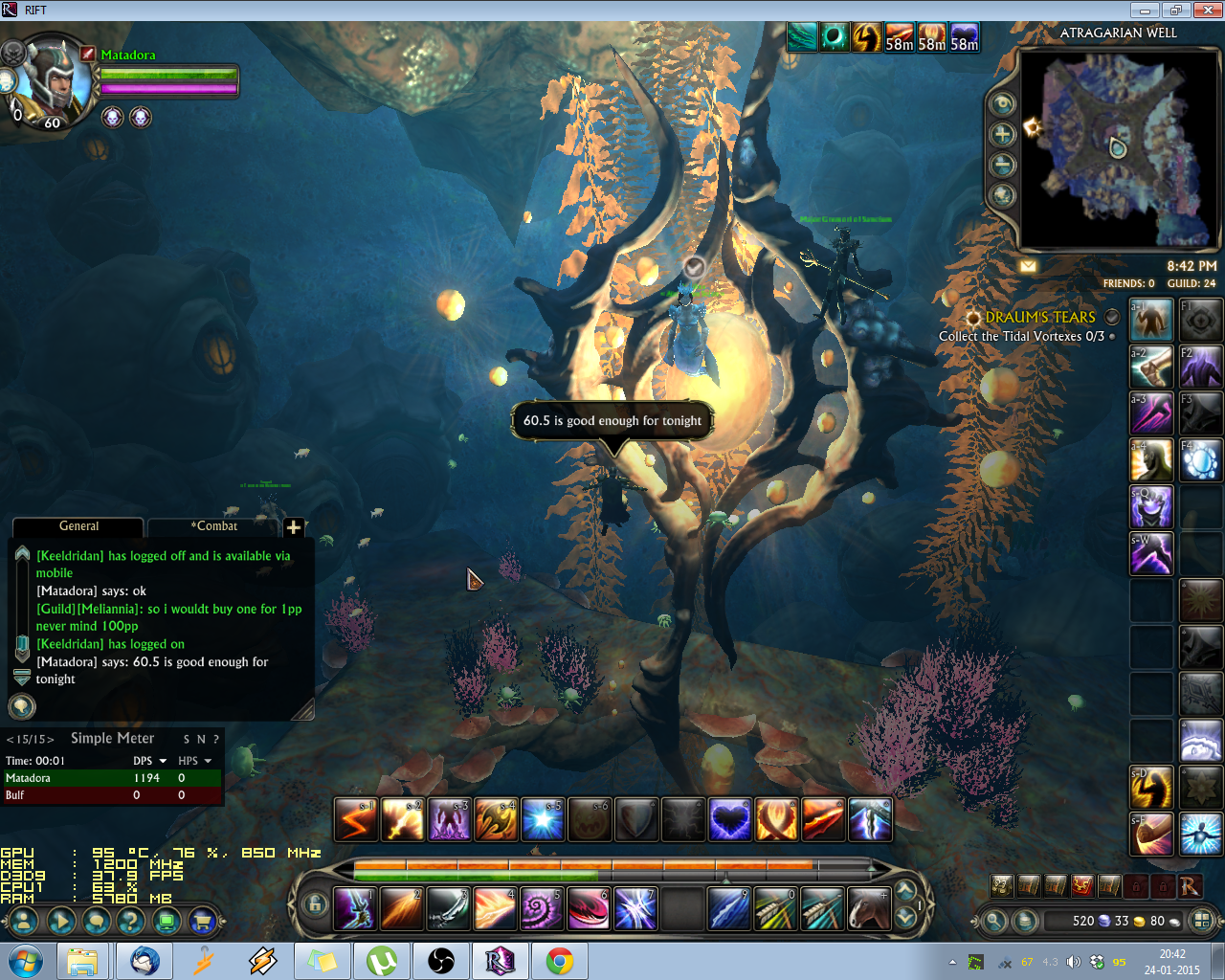 I also participated in a guild event (Concordia is the name), going to the Defiant Capital to kill guards (and players eheheh) for a guild quest.

Now, a subtle change in graphics and... I guess this shows just how outdated the rendering is, compared to GW2 and RIFT 3.0. Yeah I know, I am mean, comparing foliage with mountain rock.