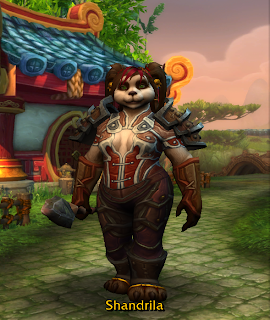 Eleven level nighties, one of each class. Who said it couldn't be done ? HA !


Shandrila the pandila was the last. It was quite fun to heal with her, but no so much to tank. I didn't try the dps spec, tbh, no time, but I should, since the damn dps pandas heal a lot in arenas, and I've got find out when and how to break that heal, if I can. 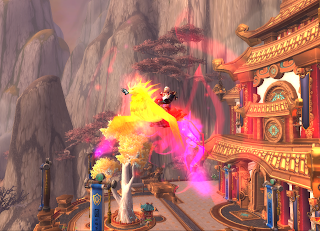 I took my time (around 30 tries I think), but it finally paid off. Tempest Keep farming is over, and my sum adds up to 162 mounts at the moment. Long long way to up to 200.
I had a couple of lucky moments last week when Malygos 10 and VoA Grand Black War Mammoth dropped.

Meanwhile, I've been seriously farming Karazhan (having 10 lvl 90's + 1 lvl 89 has some advantages after all), so if it's around 1%, it wont take long... hopefully. I remember the wife of Raidan, my old time partner in Lords of Midnight on Chromaggus, got it the first week or raiding during WOTLK. It's a shame everyone quit playing.

Also, a few weeks ago, I started farming Zul'Gurub. Ah, and last week, I went inside Zul'Aman and got what I missed during Cataclysm runs with my ex-guild Vindication, because I was unlucky and there was always some bastard that rolled higher :) . The place is so soloable these days that I completed my missing achievements. And an Amani bear, of course !

As to raiding...some rules were added to the guild, and the best raiders were out the door, ppl that had been there for years, so I don't see much future in 25-raiding. I'll stick to PVP and arenas with Mr. Stringz !

What else in the gaming front ?... not much. I finished the LOTRO quests (apart from that bloody damn bugged chain, which has no impact on the deeds), and I'm logging for fun and to rebuild Hytbold and recover Wildermore (and get some more deeds with it). Still no big desire to go for Helms Deep. In a year, may be.
Posted by Pedro Lucas at 7:17 AM No comments: 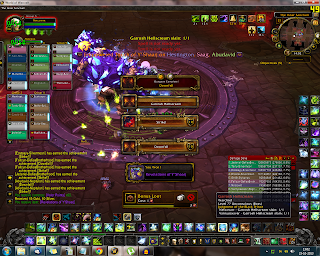 "I find your faith inspiring, little one. But I wonder if you have ever met our warchief."

Well, I've met him yesterday. And down he went ! I found the above quote in the Temple of the White Tiger, by a horde chieftain, and it summarizes the whole Mists of Pandaria expansion, which ends in Orgrimmar, with the killing of Garrosh. Yesterday, I went inside, discovered a fun (kind of) fight, actually, I think it's the only fun fight in the whole MoP raid set, and I killed him.

With it, I finished my legendary quest line.

On the same day, I finished all my Isle of Thunder achievements, as Strings helped me kill the last 5-man boss I needed.

By the way, in the last weeks, I reached Rank 10 in the Brawler's guild, and I'm now trying the Proving Grounds, but I'm still playing badly in the endless dps set of challenges (5 out of 30)

All that remains in MoP for me is a bit of exploration in the Timeless Isle. Of course, I'd like to kill all the raid bosses in normal mode, or even flexible, but I cba these days to loose my precious game time on endless wipes because dudes with my gear are doing half my dps and happy with it. So I'm enjoying solo experiences, like exploration, questing, soloing bosses, brawling, proving grounds and PVP arenas and battlegrounds. Ah, and of course, mount collection (160...40 to go ...)

On the LOTRO front, I found a terrible BUG (Quest BUG! MAKE SURE YOU READ THIS BEFORE YOU QUEST IN WILDERMORE!!!! - Page 2) that prevents me from finishing a quest line in Wildermore. That usually ruins the entire experience for me, with my obsession for getting things done the right way. I still got to finish the epic quest line, but then, I think that's it for me. I'm not sure I'll buy the Helms Deep expansion, because both my companions stopped playing, and it's a bit lonely now...

I've got to give RIFT and SWTRO a chance. I liked RIFT so much when I played it, but every time I try to restart, I'm simply lost at level 50 ! I can't even kill a mob !